The CaveSim is Coming to the 2012 NSS Convention 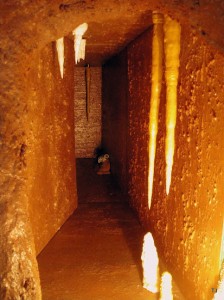 CaveSim, the intelligent crawl-through obstacle course which wowed cavers at the 2011 NSS Convention in Colorado is coming to West Virginia this summer.

The 15 meter (50 foot) long artificial cave is filled with cave formations equipped with sensors that detect when they are being bumped. That information is recorded by computer which keeps track of how often formations are hit. Once a caver exits the simulation they can look at their score to see how they fared.

After its popular debut at last year’s convention, there was a lot of interest in bringing CaveSim to the 2012 NSS Convention in West Virginia. Unfortunately transportation of the large contraption was an issue.

In order to fund the rental of a trailer and other transportation costs of the CaveSim, builders Dave and Tracy Jackson looked to KickStarter for help. In only a short time (faster than this was written), folks had helped them surpass their goal of raising enough funds to bring the CaveSim to the 2012 NSS Convention.

With the initial goal surpassed so quickly, the ultimate goal of actually buying a trailer as a permanent mobile home for the CaveSim is a potential reality. This would allow the CaveSim to attend many future events and teach people all over about cave conservation.

If you’re interested in helping this worthy cause, head on over to KickStarter and make a pledge.