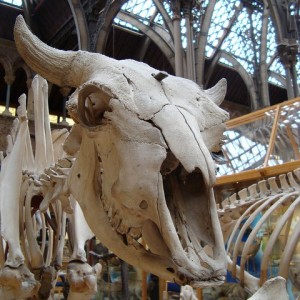 A Bison Skull on Display at the Oxford Museum of Natural History. Photo by healthserviceglasses/flickr

A paleontological study of a cave in Ukraine’s Crimea peninsula has reportedly discovered fragments of a 50,000-year-old bison skull.

The fragments were found during a December 2012 expedition to Emine-Bair Khosar cave, a vertical cave that for thousands of years has acted as a natural animal pitfall trap.

Located on the northern edge of the Lower Plateau of the Chatyrdag Massif in the Crimean Mountains, the cave has been studied since the 1960s, with scientists finding over 5000 specimens of at least 35 mammal, bird, and reptile species including the remains of mammoth, lion and bear.

Skull fragments have been found. The paleontologists hope to discover the remains of the bison’s stomach contents to get more information about the Crimean flora at that time [50,000 years ago]. Igor Timokhin, Senior Speleologist