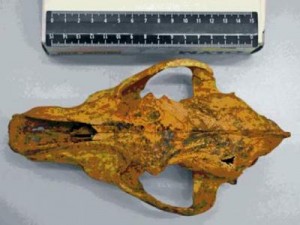 An ancient dog skull discovered in a Siberian cave offers new clues into their domestication.

Found in a cave in the Siberia’s Altai Mountains , the extraordinarily well preserved skull has been dated to 33,000 years old.

When compared with equally ancient dog remains from a cave in Belgium, it suggests that today’s dogs may have originated from more than one ancient ancestor, with domestication occurring repeatedly in many different geographic locations.

It seems long ago, before the peak of the last glacial period, people in Europe and Asia had lived along side dog species for long enough to cause evolutionary changes in the animals.

Interestingly these ancient dogs don’t seem to be the ancestors of modern dogs indicating that the relationships with those particular lineages of animals apparently didn’t survive the final peak of the last glacial period.

“The interesting thing is that typically we think of domestication as being cows, sheep and goats, things that produce food through meat or secondary agricultural products such as milk, cheese and wool and things like that. Those are different relationships than humans may have with dogs. The dogs are not necessarily providing products or meat. They are probably providing protection, companionship and perhaps helping on the hunt. And it’s really interesting that this appears to have happened first out of all human relationships with animals.” Greg Hodgins, Researcher at the University of Arizona’s Accelerator Mass Spectrometry Laboratory

The recent study in the available online journal PloS One.