Check Out the New Cave at the Canadian Museum of Nature 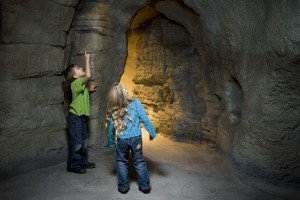 Children enjoying the cave in the Vale Earth Gallery. Photo by Jamie Kronick/Canadian Museum of Nature

A new cave was opened recently at the Canadian Museum of Nature, Canada’s national museum of natural history and natural sciences located in Ottawa.

The new exhibit was added as part of the new Vale Earth Gallery which re-opened on November 30, 2012.

The result of two years of planning and three months of renovations, the Vale Earth Gallery aims to present how the Earth formed, how powerful forces have changed and shaped our planet, and how geology and mineralogy connect with everyday life.

We wanted to provide the visitor with an immersive experience where the young and young at heart could explore and discover features in an environment that is not typically accessible to most. The cave provides us and opportunity to show a geological features in context suggesting an environment that would be required for these features to grow. Marc Beck, Canadian Museum of Nature Vale Earth Gallery Project Manager

Built by Research Casting International, the main structure of the cave – the walls and ceilings – were first framed in steel. Once complete, the steel skeleton was covered by a metal mesh, which was then sprayed with concrete to make the fake limestone. To add realism, several sections of the cave were actually cast from an actual limestone rock face.

Although not modeled after any particular cave, the 46 square meter (550 square foot) museum cave contains many common features such as stalactites, stalagmites, columns, draperies, popcorn, and even cave pearls.

To help bring the cave to life, the exhibit also has a dripping waterfall as well as some of the cave critters commonly found underground such as bats.

It’s still early for us to have gathered any feed back relating specifically to the cave, but from what we have seen and experienced on the floor, it does seem like the cave is a hit. Marc Beck, Canadian Museum of Nature Vale Earth Gallery Project Manager

For more information on visiting the Canadian Museum of Nature, including fees and hours, visit nature.ca. 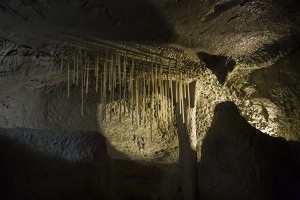 Soda straws on display in the cave. Photo by Jamie Kronick/Canadian Museum of Nature 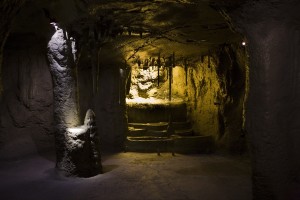