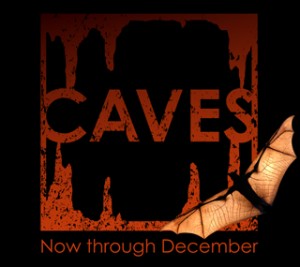 This past weekend marked the opening of a new cave exhibit at the Schiele Museum in Gastonia, North Carolina. The man made cave which took the museum staff six months to create feature an entrance from a forest mountainside which leads into 80 meters (260 feet) of dark caverns.

To create the exhibit staff recycled the previous “Pirates” exhibit that featured a 18 meter (60 foot) long pirate ship and used a spray foam insulation to cover the walls and give the typical cave feel, such as in nearby Linville Caverns, one of the inspirations for the exhibit.

The cave will hold more than 40 live animals inside, including bats, salamanders, snakes, owls, fish and a pair of 6-week-old bobcat kittens. In addition, almost 30 geological specimens from the museum’s collection will be on display to help illustrate the mineral diversity found in caves. A special feature on exhibit is a 20,000-year-old composite skeleton of a Russian cave bear.

Important for the younger caver, there will be activities that include a mini-cave specifically for climbing, a costume area and a crawl underneath the live bats area.