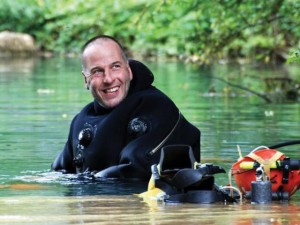 New Member of the of the Order of the British Empire Richard Stanton. Photo via the West Midlands Fire Service

An English cave diver was made a Member of the of the Order of the British Empire (MBE) in the New Year Honours list recently announced by Buckingham Palace.

Diver Richard Stanton, a firefighter based in Coventry, has received the award in recognition for his 23 years of service as a firefighter and his volunteer work as a cave rescue diver.

This is not the first time the 51-year-old has been recognized for his services.

In 2011, Stanton was voted Hero of the Year by his firefighter colleagues during their Aspire Awards ceremony. Then again, last year he was presented the Bronze Medal from the Royal Humane Society for his efforts to help recover the body of French cave diver Eric Establie who became trapped in France’s Draggonniere Gaude cave system in 2010.

It isn’t particularly unusual for me to get official looking letters in the post because of my international rescue work, but when I got notification of this on behalf of the Palace I was absolutely astounded. I’m just doing work I enjoy to the best of my ability, but I’m thrilled to be awarded the MBE. Richard Stanton, Cave Diver/Firefighter, West Midlands Fire Service