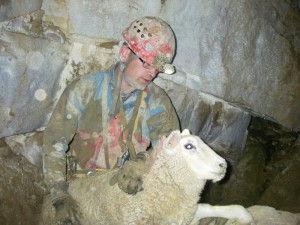 Two english cave rescue teams were called in recently to an area of the North York Moors for a mission of a different kind. 24 Sheep had broken through a fence around a sinkhole and had fallen down 15 meters (50 feet) into one of the entrances to the Windy Pits cave system.

North Yorkshire Police raised the alarm and both the Cleveland Search and Rescue Team and York Caving Club quickly responded and joined forces to try and save the sheep.

While two members of the group positioned themselves on ledge about 4 meters (15 feet) down, others descended deeper to help the stricken animals.

In the end 12 of the sheep were successfully saved, with the remainder unfortunately killed from the fall.