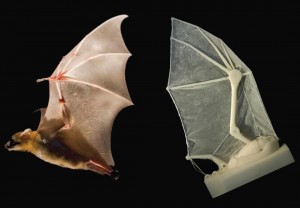 This robotic bat wing is helping give new insights into the mechanics of bat flight. Photo courtesy Breuer and Swartz Labs/Brown University

A robotic bat wing is helping to give new insights into the mechanics of bat flight.

Built by researchers at Brown University, the robot wing was modelled after lesser dog-faced fruit bat. By duplicating its wing shape and motion they were able to collect data and conduct experiments that would have been impossible with live animals.

Made from plastic bones, created in a 3D printer, and covered with super-elastic silicone elastomer skin, the wing is moved using three servo motors. When put in a wind tunnel, sensors on the robot measure the forces acting upon it as it flaps.

One of the first experiments conducted looked at the aerodynamic effects of wing folding. When some bats raise their wing during the upstroke, they first fold them back. With the help of the robot wing, it was discovered that wing folding dramatically decreases the negative lift caused during the upstroke of the wing, causing an increased total lift of around 50%.

Beyond the experiments, the researchers had may unexpected lessons when building the wing and getting it to work properly.

We learned a lot about how bats work from trying to duplicate them and having things go wrong, Joseph Bahlman, Brown University Graduate Student

Problems with elbow joints that broke repeatedly and the regular tearing of the wing membrane have led researchers to solutions that seem remarkably similar to locations of extra tendon and muscle in real bats and helped the researchers understand their purpose.

The next step is to start playing with the materials. We’d like to try different wing materials, different amounts of flexibility on the bones, looking to see if there are beneficial tradeoffs in these material properties. Joseph Bahlman, Brown University Graduate Student

The full details of the robot, including results from preliminary experiments, has been published in the journal Bioinspiration and Biomimetics.