Cave May Have Inspired Greek Myth of Hades 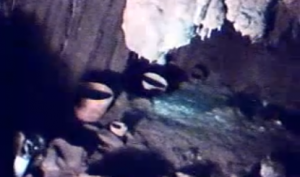 Researchers believe that a cave discovered on the southern coast of Greece may have been inspiration for the ancient Greek underworld.

Re-discovered in 1958, the 1,000 meter (3,280 feet) long Alepotrypa Cave was once used as a shelter and burial and ritual site before the entrance collapsed about 5,000 years ago trapping its inhabitants inside.

Studied since the 1970’s by Greek archaeologist Giorgos Papathanassopoulos, it was only recently that other archaeologists have been brought in and helped uncover a wealth of new insights.

It has now been discovered that the settlement extended beyond the cave and that hundreds of people may have lived at the site, making it one of the largest, most complex known Neolithic villages in Europe.

The obvious importance of the site combined with all the rituals and burials taking place and even its own underground lake, make it really easy to invite comparison to the underworld, Hades and the River Styx.

Researchers working on the project, including 40 year project veteran Giorgos Papathanassopoulos, will be presenting their findings at the upcoming meeting of the Archaeological Institute of America on January 6th in Seattle.

Killer Cave May Have Inspired Myth of Hades [LiveScience]