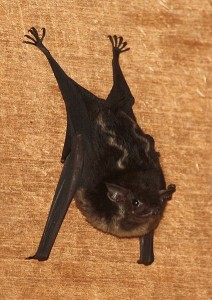 New research into bat echolocation calls has revealed that they contain much more information than is needed to hunt or find their way around in the dark.

The study, undertaken by Scientists from the University of Ulm’s Institute of Experimental Ecology, found that the echolocation calls of the greater sac-winged bat or Saccopteryx bilineata contained “pronounced vocal signatures encoding sex and individual identity.”

This indicates that they could be passing along information such as species identity, age, sex, group affiliation, and other details.

As a result the calls are now believed to be important in facilitating courtship and social communication in general.

The social information in echolocation calls about the sex of the calling bat benefits listening harem males because they can distinguish between females and male rivals. It might also benefit calling females because they are greeted friendly. Mirjam Knörnschild, lead author of the study to Discovery News

Another interesting discovery is that bat pups were found to babble, mixing up their calls. This is the first time time it has been observed outside primates.

The results of the study are available in the latest Proceedings of the Royal Society B.