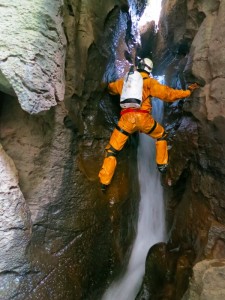 A recent expedition to Peru has completely re-written the list of the world’s highest caves.

The six-week long adventure, which began in late September, saw an international team of 10 highly experienced cavers come together from Canada, Australia, New Zealand, and the UK.

Exploring some of the toughest terrain in the world, the team pushed difficult vertical caves, some with active water systems, in temperatures close to 0 degrees Celsius (32 degrees Fahrenheit).

The first three weeks, spent in the Cajamarca area in northern Peru, were organized to explore an area around where a large river, the Rio Jadibamba, disappears into the limestone. Surveying the main system, full of icy water, the cave was found to be around about 800 meters (2625 feet) long and 40 meters (131 feet) deep. In the immediate area a number of other caves, some with similar active water systems which were suspected to be connected to the main system, were also surveyed and explored. 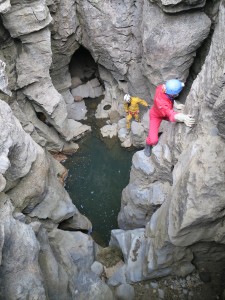 Tips by locals led the team to search in the area around Cajabamba to the south and led to the discovery of further caves, with the most exciting being 12 vertical holes, two of which had 10 second drops. Unfortunately due to time constraints none of them were able to be explored.

Additionally, after confirming with three different GPS receivers and altimeters, it was also discovered that two caves located on the 2004 expedition were actually over 100 meters (330 feet) higher than previously reported, making their elevations nearly 4700 meters (15,420 feet) ASL.

It feels like we have only scratched the surface of entertaining the potential in Peru, unlocking it, enjoying it and developing a project for the future generations of caving to exploit. Andy McKenzie, caver

For more information on this exciting expedition, a journal and a photo gallery of the trip can be found by visiting Peru Caving.