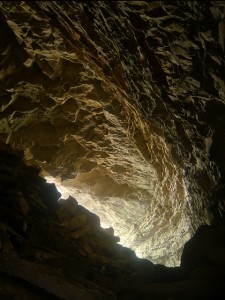 With five entrances and more than 11 kilometers (seven miles) of passageway, Lost Creek Cave is one of the best-known recreational caves in the state.

Formerly owned by the late James Rylander of Americus, Georgia, the cave and adjacent waterfall are part of a 200-acre property just northwest of the park’s boundary. The property was bequest to the state after Rylander’s death in 2011.

The cave, home to 11 rare species, will now be better protected from abusive visitors who have left garbage and graffiti and set fires.

It is expected that the property will be kept in a natural, unimproved state, although there is talk of a hiking trail being constructed to link the Lost Creek Falls area to the nearby Virgin Falls State Natural Area.

Officials anticipate continuing to allow cavers to access Lost Creek Cave, despite the closures of all caves on state-owned lands due to white-nose syndrome.

I don’t think it was Mr. Rylander’s intention for us to get the cave and the next day close it, Stuart Carroll, Naturalist and Interpretive Specialist at Fall Creek Falls State Park