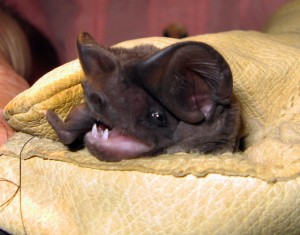 This winter biologists Paula Halupa and Marilyn Knight of the South Florida Ecological Services Office will be enlisting dogs in their search for the elusive Florida bonneted bats, the largest bat species in Florida.

Although traditionally tracked with radio telemetry, captive Florida bonneted bats that were tested with the radio transmitters didn’t tolerate them very well. As a result a team of trained Eco-Dogs and their handler will be brought in from Auburn University.

These dogs have been used by natural resource managers, conservationists, researchers and the industry to detect everything from bears and pythons to invasive root fungi. This time they’ll be tracking down where the bats naturally roost by following the scent of the bats feces or “guano.”

Searches will initially begin near artificial bat houses where the bats are known to roost or in locations where their unique echolocation calls have been recorded.

The hope is that information gained from the research will help the U.S. Fish and Wildlife Service better protect the bats and their habitat.