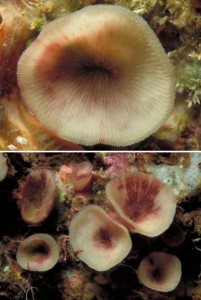 A new coral species, identified recently in the open access journal ZooKeys, has been found to survives in complete darkness on the ceilings of underwater caves in coral reefs of the Indo-Pacific oceans.

As a result, the strange coral also lacks the symbiotic algae that most corals depend on to survive. Coral reefs normally require this symbiotic algae, called zooxanthellae, in order to survive and grow. As the algae requires sunlight, most corals do not occur deeper than 40 meters (130 feet) under the water, where the sunlight becomes too dim.

This species of coral, named Leptoseris troglodyta, ancient Greek for “one who dwells in holes,” has somehow has adapted to live without the algae. Due to its absence it has turned white just as corals which suffer from bleaching, although it does not exhibit any of the ill effects.

Scientists studying the coral now wonder if corals may be found deeper than 40 meters (130 feet) under the waves.