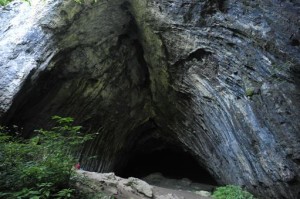 First explored in 1859, the nearly five kilometer (three-mile) long Meziad Cave only began welcoming visitors in the 1960’s when a road made the cave accessible.

Following the opening of another nearby cave in the 1980’s the once popular Meziad Cave fell into ruin.

The new improvements, made possible by over 180,000 Leu ($50,000 USD) of funding from “Green Entrepreneurship”, went into toward the refurbishment of steps, rails and bridges as well as improved lighting using modern technology that is very friendly to the cave environment.

Now the Romanian Center for Protected Areas and Sustainable Development plan to include the cave, along with four others, Peştera Urşilor, Farcu, Ungurul Mare and Vadu Crişului, into a package cave tour, the first of the kind for the area.