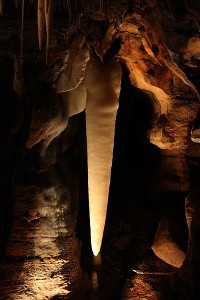 This Memorial Day weekend Ohio Caverns will be opening two new cave tours to the public.

A new Historic Tour includes parts of the caverns first viewed by visitors after it’s discovery in 1897, when heavy rain caused a 10 meter (30 foot) deep sinkhole to open and reveal the cave.

The 45-minute tour begins with a trip to the sinkhole via shuttle bus where visitors begin the 1.2 kilometer (3/4 mile) long underground adventure.

The other new addition is known as the Limestone Tour is shorter and provides access for the disabled. It features the first part of the original Natural Wonder Tour and is entirely wheelchair accessible.

The new tours are part of an effort that began in 2007 when workers first started removing mud and debris from the cave, making once crawling only passages into walkable paths.

For more information on visiting Ohio Caverns, including hours and admission fees visit the Ohio Caverns website or call 937 465-4017.