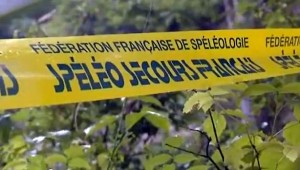 A french caver was killed last Friday after a rockfall pinned him under two rocks weighing nearly a ton.

The accident, which took the life of Thierry Vilatte, 43, occurred during explorations about 150 meters (500 feet) below ground in a narrow vertical fractured passage of Scialet Motus, a cave near in the Chartreuse of south-eastern France.

Members from Spéléo-Secours Français, the French cave rescue organization are on the scene and working to remove the body.

Latest reports indicate that although the body has been freed and is prepared for removal, the actual operation will be long and difficult as nearly 50 meters (164 feet) of passage will have to be widened to allow a stretcher to pass.