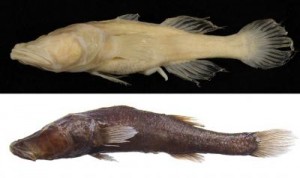 The team, made up of researchers from the Louisiana State University and the American Museum of Natural History, used comprehensive DNA analysis to determine that both fish groups, one from Madagascar and the other from Australia, descended from a common ancestor before being separated by continental drift almost 100 million years ago.

The two relatives, both less than 10 centimeters (3.9 inches) long and lack pigment, are from the genus Typhleotris in Madagascar and Milyeringa in Australia. As cave fish generally very restricted distributions within isolated limestone caves, it is quite an exciting discovery to find a close relationship between two groups separated by about 9,700 kilometers (6,000 miles) of open ocean.

The study also resulted in the identification of new species that further supports existing biological evidence for the existence of Gondwana, the southernmost of two supercontinents that later became the Pangaea supercontinent.

This is a great example of biology informing geology. Often, that’s how things work. These animals have no eyes and live in isolated freshwater caves, so it is highly unlikely they could have crossed oceans to inhabit new environments. Prosanta Chakrabarty, Assistant Professor and Curator of Fishes at Louisiana State University’s Museum of Natural Science

In another unexpected discovery, one of the new cave fish species discovered is darkly pigmented, a strange feature among cave fish which usually lose their pigmentation. Even more unique is that research on the fish has found that it evolved from a pigment-free ancestor, indicating that some species reverse their evolution. This is intriguing as it suggests that caves are not the ‘evolutionary dead ends’ they were once suspected to be.

The full results of the study are scheduled to appear this week in the journal PLoS ONE.