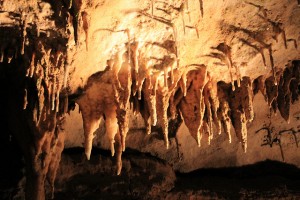 A team of scientists studying speleothem growth in Sibera has discovered that permafrost may not be so permanent, and it may begin to melt if temperatures continue to warm.

In the study, published in the journal Science, the researchers, working with cavers from Irkutsk’s Arabica Caving Club, dated the periods of speleothem growth in six caves at different latitudes from northern Siberia to China’s Gobi desert in the south. From their data they were able to reconstruct the approximately 500,000 year history of permafrost in past climates.

As speleothems are not able to grow in permafrost, the ones in the most northern cave studied (at 60°N degrees latitude) have been dormant for 400,000 years, during a warm period known as Marine Isotope Stage 11.

Surprisingly they discovered that speleothem growth in areas of permafrost occurred when the global average temperature were only 1.5 degrees Celsius higher than they are now, suggesting that if temperatures continue to rise, the thawing of Siberia’s permafrost could not be far away.

This is a concerning as permafrost covers nearly a quarter of the land in the Northern Hemisphere and its thawing would likely release most of its trapped carbon – twice as much as is currently in the atmosphere. The addition of all this extra carbon to our atmosphere would only further accelerate climate change.