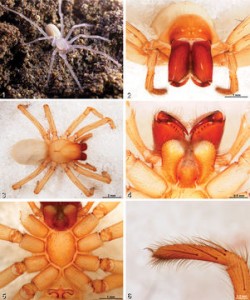 A new species of cave dwelling spider has been identified in a network of three limestone caves in the Menoreh Hills area of Purworejo in Central Java.

First discovered in 2008, the spider is believed to belong to the genus Amauropelma, which has previously been found only in eastern Australia.

Named Amauropelma matakecil, the spider has vestigial eyes that are so small that they just appear as transparent dots.

Interestingly scientists studying the spider have so far been unable to find any male spiders, which has some wondering if the spider may reproduce asexually.

The future discovery of a male spider could either confirm or alter the genus identification.