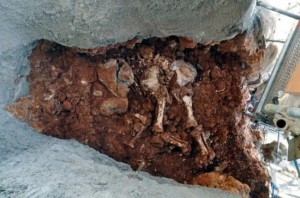 Photo via University of Barcelona

The bones of an ancient elephant have been discovered in a Spanish cave.

An archaeological excavation in Cova del Rinoceront (Rhinoceros’ cave) near Barcelona uncovered the partial skeleton of a young elephant, determined to be less than 7 years old.

Although only it’s two back legs, pelvis and spine have so far been located, researchers from the University of Barcelona are confident that the rest of the skeleton will be discovered on the next expedition.

Estimated at 100,000 years old, the find shows that elephants inhabited the area before the arrival of woolly mammoths during the Ice Age. This, along with the discovery of many Mediterranean tortoises in the same cave, also seems to suggest that at one time the temperature of the area was much warmer.

Rhinoceros cave is known for it’s animal remains dating back from 200,000 to 80,000 years BC. Markings on the remains found in the cave suggest that it was once a den where carnivores brought their prey.