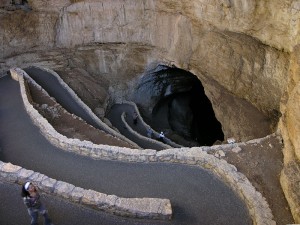 The Carlsbad Caverns Visitor Center is closed and it’s cave tours have been cancelled after the air became chemically contaminated during the ongoing elevator renovation work.

The visitors center was closed at around 2:00pm on Monday after what appeared to be bad air emanating from the elevator shaft.

Since September 2010, the two primary elevators that transport visitors from the visitors center down into Carlsbad Caverns have been out of service while a project is underway to replace important structural steel beams in their hoistway.

The park is doing everything possible to find the source of the contamination and remedy the situation. We need to err on the side of safety. We will open the cave and visitor center as soon as possible. Carlsbad Caverns automated message

This isn’t the first time there have been problems with the elevator restoration. Twice in May, 2011 the visitors center had to be evacuated due to fumes resulting from construction.

Update: Carlsbad Caverns Reopens After Experts Give All Clear