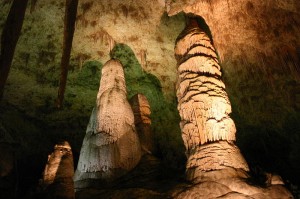 All visitors and employees were evacuated from the cave and visitor center around 4:30 pm following a soaking of more than 63 millimeters (2.5 inches) of rain since 6:00 am that morning.

Although the road through Walnut Canyon was still passable at the time of the evacuation and closure, continued heavy rains were forecasted for later in the day.

Once emptied, the park gate remained closed throughout the evening and all programs, including the Bat Flight Program, were cancelled.

The potential for flooding has been higher than usual in Carlsbad Caverns National Park after a large fire that burned much of the vegetation along the canyon road in June of 2011.

UPDATE: The park re-opened on Thursday July 18th at 10:00 am, two hours later than its usual opening time.