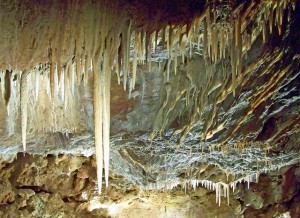 Plans began last winter after a team exploring the caverns found a route that would allow for the creation of a loop tour.

The creation of the new tour route will increase the capacity of the cave from 84 visitors to over 200 each hour.

We’ve elected to open up some new sections of cave, make a loop tour which allows us to get more capacity, see more of the cave and actually expand the experience for people. You’ll be able to see more formations, a lot more cool rooms that haven’t been opened before. Glenwood Caverns owner Steve Beckley to KREX TV

Although work is on hold during the busy summer season, crews will return this winter to add lighting and stairways before it’s slated opening, May 1st, 2013.

The entire expansion project is expected to cost approximately $250,000.