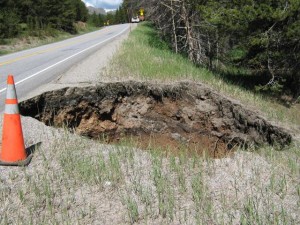 Photo via Colorado Department of Transportation

The deep sinkhole that recently opened up next to a Colorado highway was caused by an abandoned railway tunnel.

The Colorado Department of Transportation reports that engineers, maintenance supervisors, and geological experts examining the hole, now estimated at 30 meters (100 feet) deep, discovered that it was caused by a century-old railroad tunnel that collapsed decades ago.

The tunnel, believed to have been constructed in 1880, was part of the Royal Gorge Railroad route.

Experts suspect that the decade long delay in the appearance of the hole is due to the soil deep down remaining frozen until very recently.

As a result of the sinkhole, U.S. Route 24 at Tennessee Pass is down to one lane, and portable traffic signals have been brought in to direct traffic one direction at a time, as northbound and southbound motorists must take turns traveling through the closure area. There is no estimate on when the highway will be fully reopened.