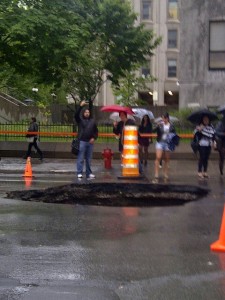 A sinkhole opened up on a major street in Montreal, Canada following a huge rally to protest a government plan to raise tuition costs.

The protests which have lasted over 100 days, have seen many people arrested and have attracted high-profile celebrities such as filmmaker Michael Moore and the band Arcade Fire.

A new law limiting the right to demonstrate, has increased the number of protesters.

No injuries were reported when the four square meter (43 square feet) hole opened up.

Huge sinkhole opens in Montreal as tens of thousands march in rage [rt.com]