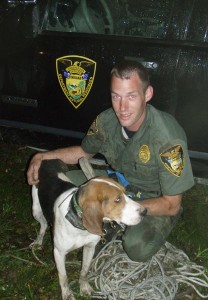 A hunting dog was rescued over the weekend after falling through a sinkhole near Jennings County, Indiana.

The dog, named Momo, was out raccoon hunting with his owner Walter Campbell on Friday when he disappeared. Eventually discovered on Saturday, Momo was found trapped in the bottom of a cave.

Realizing that they were in need of assistance, the hunters called the Jennings County Sheriff’s Office who in turn contacted Indiana Department of Natural Resources conservation officer Zach Walker who attended the scene.

Equipped with a borrowed ladder and rappelling equipment Walker lowered himself about 12 feet through a narrow opening to rescue the dog who was unhurt and extremely excited to be reunited with his owner.