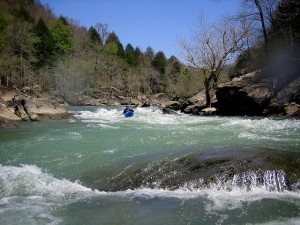 Four teenagers took shelter in a Kentucky cave on Sunday after they became stranded by high water.

The teenagers, two 15-year-olds, a 17-year-old and an 18-year-old, were out four-wheeling in two pickup trucks when they became stranded by the high water of Rockcastle River close to the No. 9 Tunnel, near East Bernstadt, Kentucky.

After getting a report that the teens were missing, folks from the London-Laurel County Rescue Squad began searching and soon found the teens had taken shelter in a cave and had a fire going.

After determining that it would be too dangerous to try to reach the teens in the dark, the rescuers planned to get the boys out of the cave after sunrise on Monday morning.