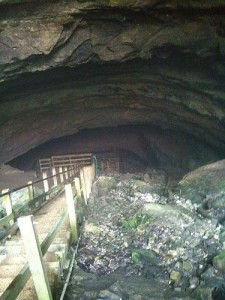 A tour group exploring Kentucky’s Hidden River Cave were rescued after a freak storm let loose a torrent of rain and quickly began flooding the cave.

The tour group, which included eight out-of-state teenage students, one teacher and a guide, were 2.4 kilometers (1.5 miles) deep inside the cave on an off trail tour and unaware of the situation.

Rather than waiting it out, executive director David Foster and guide Joe Forsythe decided to enter the cave, water already 1 meter (3 feet) high, to rescue the group.

There were two options here, we could have the group sit and wait in out in the back higher sections of the cave, which could have been a day or more than a day, the scary thing about it is when you have a line of storms coming you don’t know how long that could be, we made a decision to go in there after them quickly, David Foster Hidden River Cave Executive Director to wbko.com

He had a hand line with him and we used it to get us through the water, I tied it around my waist and swam through the river, everyone else was following along holding onto the hand-line, when we could stand up we did, other times we were swimming, and the whole time we were in the water it is rising and on top of it the current was very strong Joe Forsythe Hidden River Cave Guide to wbko.com

Although everyone exited the cave safely, by the time they made it out the water had risen over 2 meters (6 feet) high.