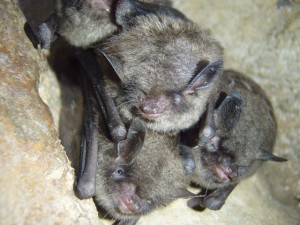 For the first time since 1966, an endangered Indiana bat has been found in the state of Georgia.

On April 14th, a lone female Indiana bat was tracked from a cave in Tennessee to a standing dead pine tree in Georgia’s Rich Mountain Wildlife Management Area by a private consultant.

What’s even more exciting is that researchers monitoring the site since have counted another 13 bats using the same tree. Although there is yet no confirmation that the other bats are indeed the elusive Indiana variety, a Georgia Department of Natural Resources biologist Trina Morris believes that the number of bats seen and the length of time the confirmed Indiana bat has spent in the area that they are looking at a maternity colony of the endangered species.

Indiana bats gather in maternity colonies under the loose bark of dead or dying trees and in hollow trees.

Threatened by disturbances, loss habitat, vandalism, pesticides and diseases such as white-nose syndrome, the population of Indiana bats has been halved since the species was listed as endangered in 1967.

Due to the rarity of this visitor, DNR staff along with folks from the U.S. Forest Service and Copperhead Environmental Consulting will continue to pay close attention to the site in hopes of learning more.