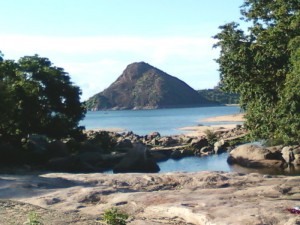 New cave art has been recently discovered in two caves near the southern tip of India.

Discovered by a young archaeologist in the remote Udumalaipettai forest in India’s Tirupur district, the caves, named Vanapechialai and Vanaraparai are covered with red and white orcre paintings.

Vanaraparai cave contains some 28 sketches of man and animals as well as a number of hand prints.

It is imprinted twice in pure red-ochre. In the right hand, the ring finger is missing, suggesting that the imprint is that of the village chieftain or Moopan. In primitive societies during pre-historic period, the Moopan’s ring finger was always cut. Vijayakumar, archaeologist

Vanapechialai has a large number of faded red-ochre paintings, including six red hand marks and other unidentifiable images.

The caves, which are located in an elephant corridor, are difficult to access, with bats and huge beehives posing a problem when accessing during the daytime.

Initial dating puts some of the paintings in Vanaraparai at 3,000 years old, while others are 2,000 years old.