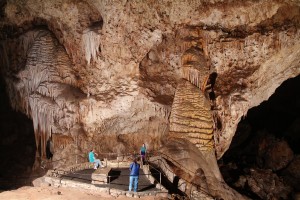 As part of an annual alternative spring break program, a group of Texas A&M University students spent their recent week off at Carlsbad Caverns National Park.

During their time at the park, the dozen students and their staff advisor removed lint from formations in the cave, removed barbed wire and old telephone poles and lines along the park escarpment, and helped clean an archeological dump site.

Coming here has been awesome. We shed a lot of blood, sweat and tears because sometimes the work was hard. But we all bonded with each other and the rangers that worked with us. Christine Jones, a Texas A&M junior

All told, more than 600 hours of time was volunteered by the students who are majoring in such subjects as genetics, biology, civil engineering, oceanography and other scientific fields.

It’s been pretty interesting, I have learned a lot about conservation, preservation and the outdoors. I got to meet a lot of cool people and park rangers. I got a better idea of what they are doing here at the park and their priorities for the park. I highly recommend alternative spring break. Sure, it was hard work, but it was very rewarding being here. I was doing something that was greater than myself. Elda Ramirez, a Texas A&M graduate student