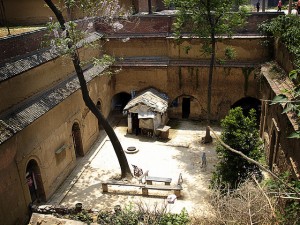 According to a recent report by the Los Angeles Times, over 30 million people in China live underground.

Many of the underground “cave homes” are located in China’s Shaanxi province, a region which is well suited as the ground is easily excavated.

Often dug into the side of a hill or mountain, many of the homes have blankets or paper hanging from the entrances to act as a doorway, while others are more secure with brick masonry entrances. Some of the fancier homes even have multiple rooms with electricity and running water.

It’s cool in the summer and warm in the winter, Ren Shouhua, Grew up in a cave home.

Most of the time the dweller chooses to live underground, not out of poverty, but because it’s more practical. It doesn’t take much money or skill to build, and as an added benefit, farmers can save their flat productive land for farming if the home is built into a slope.

More than 30 million people in China live underground in caves [NYDailyNews.com] & In China, millions make themselves at home in caves [Los Angeles Times]