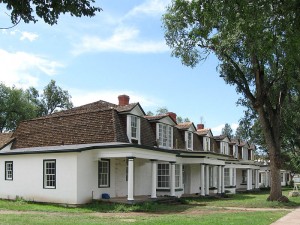 As part of the 50th Anniversary of the Southwestern Region of the NSS, cavers have volunteered to perform a public service project at Fort Stanton State Monument in exchange for use of the cafeteria and other buildings for their anniversary celebration in May.

The assignment selected for the cavers, was to repair the second floor balcony rails and supports on Building 9 which dates to 1866. For the project, the monument is providing the material while the cavers are providing the labor.

Building number 9, like many of the 1870’s structures needed repair and just plain old TLC. In this situation, the railing or balustrade along the second story was badly deteriorating and required painting, replacement of balusters and other parts that had totally rotted. Lynda Sanchez, a SWR volunteer and Fort Stanton advocate

Initially began on February 23rd and 24th, the project should be finished by the end of March, with a Southwest Regional National Speleological Society meeting and work trip planned for March 24th.