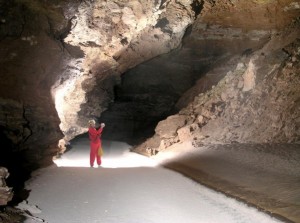 The U.S. Bureau of Land Management has released a Resource Management Plan Amendment and an Environmental Assessment for Fort Stanton Cave in southern New Mexico.

Fort Stanton Cave is home to what may be the longest continuous cave formation in the world. The formation, known as Snowy River, comprises of white calcite that go on for kilometers. Discovered in 2001, after 30 years of investigation by cavers into strong airflows coming through a broken down area in the cave. It is currently surveyed to approximately 8 kilometers (5 miles), but it has yet to reach an end.

In 2009, Fort Stanton – Snowy River Cave National Conservation Area was created in order to “protect, conserve, and enhance the unique and nationally important historic, cultural, scientific, archaeological, natural and educational subterranean cave resources”. This management plan amendment is the next step in the process to protect the cave.

Members of the public have until June 9th, 2011 to make comments on the plan.

For more information or to read the proposals, head on over Fort Stanton-Snowy River Cave National Conservation Area website.