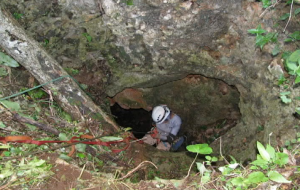 Screengrab via University of Cincinnati

Researchers from the University of Cincinnati have been studying the caves underneath the ancient Maya city of Xcoch.

One of the largest cities in the region during the period between 800 BC and 100 AD, Xcoch was built above one of the few cave systems in the region that penetrates the permanent water table.

The city, complete with a great pyramid and other elaborate architecture, is thought to have relied heavily on the underground water resource.

This is in a region that has no surface water, there are only a handful of caves that go deep enough to get to the permanent water table, so for anyplace that’s bone dry for five months out of the year, this is a pretty special location. Nicholas Dunning, University of Cincinnati Professor of Geography

Extensive mapping and excavations of the site has uncovered a network of cisterns and reservoirs that fed the community’s water supply. In the cave below, researchers have discovered hills of broken pottery and charred sacrifices, suggesting that the cave also played a role as a religious site that involved worship of the rain gods.