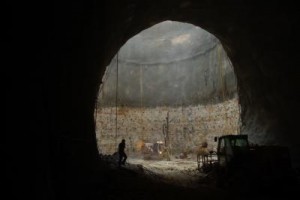 The Hebrew University of Jerusalem Cave Research Unit have completed an exploratory survey of a cave that was discovered during construction works for a new train station at the entrance to Jerusalem. The opening was found at the base of a deep service shaft being excavated for a tunnel leading to the new station.

The narrow karstic cave looks like an underground canyon, with walls a few dozen meters high. Within is an underground stream flowing in a south-easterly direction.

During the explorations, a series of small waterfalls were discovered ~200 meters from the entrance. Though the total length of the cave is yet unknown, it is expected to continue for at least another several hundred meters. Already, “this cave is the largest and most impressive of its type that has yet been found in Israel,” said Prof. Amos Frumkin of the Department of Geography, who headed the expedition.

Researchers are excited for the possibilities of studying the caves water supply to gain valuable information on water pollution in the area.