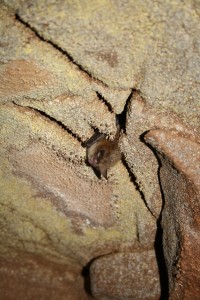 Biologists have confirmed more cases of white nose syndrome in bats hibernating in Ohio after bats in The West Woods in the Russell and Newbury Townships tested positive for the disease.

First discovered in Ohio at Wayne National Forest in 2011, the disease was detected last month at Liberty Park in Twinsburg.

In late January bats were seen acting erratically near the ASM International Complex in the Russell Township. One of the bats that made it into the building was captured by a Geauga Park District naturalist from The West Woods Nature Center and submitted for testing.

Soon afterward, the news surfaced of WNS being found in nearby Twinsburg.

In response, Geauga Park District’s Natural Resource Management Department coordinated weekly surveys at The West Woods in Russell Township. It didn’t take long before a deceased Northern Long-eared Bat was discovered hanging on a tree within 30 feet of a known hibernaculum.

Lab results from the two bats indicated that both suffered from white nose syndrome.

As a result, all off trail hikes in the vicinity of the bat hibernacula have been rerouted and signs have been placed near the caves to warn visitors to stay away.