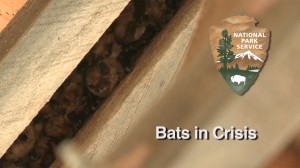 A new video series on White-nose syndrome has been released by the National Park Service.

Titled “Bats in Crisis”, the three video series is aimed to educate the public and features National Park Service scientists, technicians, and educators discussing the disease, how it’s affecting bats and what’s being done about it.

We need the public’s help to limit the spread of this disease so we are asking visitors to take a look at these videos and understand what steps they can take when touring or exploring caves. Jonathan B. Jarvis, National Park Service Director

The videos are available online, and visitors to the cave parks will be encouraged to access them using QR codes affixed to signs, kiosks, brochures, and other media.