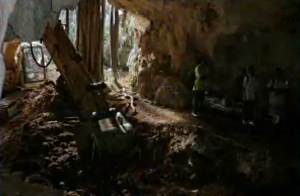 Many Caymanians are furious after a photo showing a large excavator at the mouth of the bat caves in North Side in the Cayman Islands was put on Facebook.

In an attempt to turn the caves into a tourist attraction, a developer is building a nature trail through the cave.

The contractor claims that it’s a misunderstanding.

“First of all, we’re not destroying, we’re preserving. We’re now demucking the caves in order to have access ability into the caves.” – James Martin Ebanks, Contractor

Watch the video on Cayman 27 for more images.