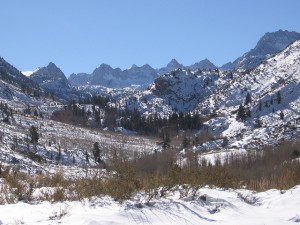 Rescue groups responded to a call out last weekend after a man was reported overdue from a caving trip in California’s Inyo Mountains.

When the man, who ventured out alone on the morning of Januray 1st, did not return in the evening, his wife alerted search and rescue. Inyo Search and Rescue responded and sent a team out, but were not successful in locating him.

At around 11:00 AM the man was located when ground teams found and followed his tracks to the cave. Meanwhile, a California Highway Patrol helicopter spotted a cave with a duffle bag sitting at its entrance.

Once he was reached, it was apparent that he was fine, albeit trapped inside as he was unable climb out of the hole. The teams hauled him out without further incident.

The moral of this story is not to go caving alone.