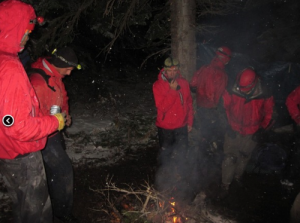 Three cavers had to be rescued on Sunday after they got lost in Wyoming’s Ice Cave-Wind Cave system.

The cavers, in their early twenties, entered Ice Cave on Saturday morning on a six to 10 hour long through trip to Wind Cave. When they didn’t return by their overdue time on Sunday morning, their family members alerted rescuers.

Teton County Search and Rescue (TCSAR) responded to the call and arrived at the scene at Darby Canyon by mid-day. After getting assembled and doing preliminary checks, cave teams entered each entrance in the early evening to search the entire route for the missing party, meeting in the middle.

After an initial note was found indicate they were lost and in need of assistance, the subjects themselves were located intact, albeit tired and hungry.

Shortly after 1:00am on Monday the party emerged from the Ice Cave entrance after spending more than 36 hours in the cave.

Over 40 Teton County Search and Rescue members were involved in the operation, which included other members of the public.