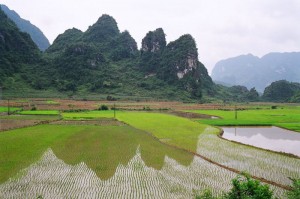 Four prospectors and a rescuer who went in to retrieve them, are believed to have suffocated in a rural cave in the northeastern Vietnamese province of Cao Bang.

After hearing rumors of gold in Cot Khan Cave, seven men set out on December 27th to discover if the rumor had any substance.

Trieu Chong Vang, one of the three surviving prospectors, reports that while operating a water pump to facilitate gold panning, four of the men fell into the cave.

The next day while making his way into the cave in an attempt to rescue to the prospectors, local militiaman Trieu Van Dung, suffocated due to bad air.

For the next five days rescuers using toxin detectors and oxygen masks attempted to enter the cave and retrieve the bodies, but were unsuccessful.

Rescuers have now called of the search because of the high levels of toxic substances in the air.