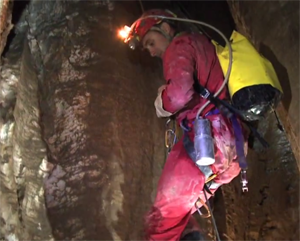 The trip, which took place this past August, was made to commemorate 50 years since cavers, including Fernand Petzl, first reached the record-breaking 1,000 meters (3,280 feet) depth at the cave.

Interspersed with scenes from the 1962 film “Siphon-1122”, which does a good job of portraying what it would have been like for the cavers during their record-breaking expedition some seven years earlier in 1955.

Caving in the Gouffre Berger [Petzl]