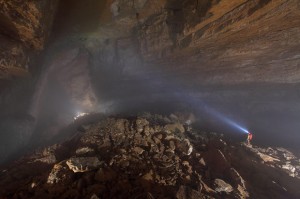 Photo by Robert Shone via The Telegraph

The Telegraph has just come out with a photo story on British cave photographer Robert Shone‘s trip to France’s Gouffre Berger cave system, the first cave found to be deeper than one kilometer.

From 1953 to 1963, it was the deepest known cave system in the world at 1,122 metres (3,681 feet) in depth. Although it has gained a few meters since then, they couldn’t keep it from been bumped all the way back to 28th in the world and fourth in France.

It remains an extremely popular destination for cavers, despite a propensity for flooding.

“The entrance comprises of about eight vertical shafts that total around 300 metres. The shafts are split up by sections of tight meandering passages, which in places are only about a foot wide. Once you get through those shafts at about 300 metres you suddenly burst out into the side of an enormous passage about 30 metres high and 15 metres wide.” – Cave photographer Robbie Shone to The Telegraph