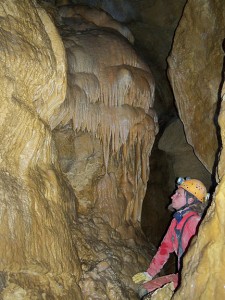 Earlier this week the Hungarian Cave and Karst Research Society announced a connection between the Harcsaszájú-Hideglyuk System and Pálvölgyi-Mátyáshegyi cave has led what is now the longest cave in Hungary.

At 28.6 kilometres (17.7 miles) long, the newly dubbed Szépvölgyi System, has 10 entrances. The first of which was discovered in 1904 while quarrying limestone to be used for the construction of buildings in Hungary’s capital, Budapest.

A result of over 31 years of exploration by more than 250 cavers, the final breakthrough came after serious digging efforts removed a large a pile of rubble which opened into a natural connection.

The Szépvölgyi System cave system formed approximately 2 million years ago, when the groundwater level rose into Eocene limestone and began to dissolve it. The resulting cave is a labyrinth of intricate tunnels which require a map to navigate and the folks exploring it believe that there is still much more to discover.