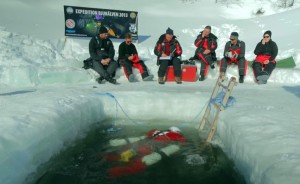 Due to a strong summer rate of flow that make diving impossible, expeditions to the cave are only attempted in the wintertime when the flow is almost nonexistent. However, winter provides its own obstacles for divers including over a meter of ice and snow and freezing surface temperatures around -20 Celsius (-4 Fahrenheit).

As a result of their extreme efforts, the this years expedition succeeded in extending the cave 313 meters (1027 feet) making it the 10th longest cave in Sweden with a total length of 915 meters (3002 feet).

Additionally, the team was excited to discover an unexpected dry section of the cave. The 105 meter (344 foot) long section contains a nine meter high hall with water cascading down from the ceiling, giving the team hope that there may be a connection to the surface.

Preparations for next year’s expedition, in what experts believe could some day become Sweden’s longest cave, are already under way.