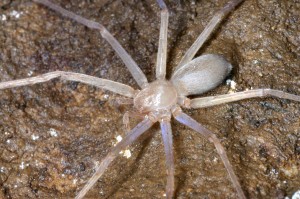 A arachnologist from the Senckenberg Research Institute in Frankfurt has discovered the first eyeless giant crab spider ever recorded, in a cave in Laos.

The blind cave spider, dubbed Sinopoda scurion, was named after the Swiss company Scurion that makes headlamps for caving.

Measuring in at only six centimetres (2.3 inches) long, it is not the largest of the 1100+ species in the huntsman family which are known for their speed and mode of hunting.

One of nine cave dwelling species described by the Frankfurt researchers, each of the spiders having adapted to their life underground in one way or another. The number of eyes range from eight, six, four and two or in the case of Sinopoda scurion, none.

We already knew of spiders of this genus from other caves, but they always had eyes and complete pigmentation. Sinopoda scurion is the first huntsman spider without eyes. Peter Jäger, Head of the Arachnology Section, Senckenberg Research Institute

The study has been published by the scientific journal Zootaxa.