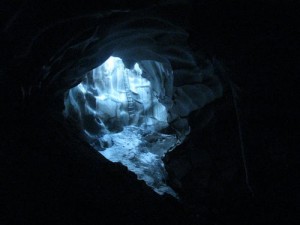 Antarctica’s ice caves are being used by biologists as a way to reach the unique microbes living deep beneath the Earth’s crust.

During a presentation at the winter meeting of the American Geophysical Union, Hubert Staudigel, a research geologist with the Scripps Institution of Oceanography at the University of California, San Diego praised caves and mining shafts for allowing access deep into the earth.

Staudigel and his team have been doing research inside ice caves found on the summit plateau of Antarctica’s Mount Erebus, a 3,794 meter (12,448 feet) high dormant volcano, as part of a part of a larger project to learn more about the earth’s underground biosphere.

The team has already found a wealth of interesting microbes including communities of eukaryotes and prokaryotes. Due to the lack of organic matter underground, these cave dwelling microbes get their nourishment from minerals such as iron and manganese.

The caves, known as Warren Cave, Warren West and Harry’s Dream were formed when hot gas was vented through cracks in the Earth’s crust and melted some of the overlying snow.

Occasionally ice towers form over the caves due to the surface air being so cold that it freezes steam in place, creating grand towers of ice.

Lucky for the researches studying the cave, some of that volcanic heat remains and keeps the caves warmer than the surface. Warren Cave is a balmy 18 Celsius (64 Fahrenheit), while Warren West and Harry’s Dream measure in at 2 and 11 degrees Celsius (36 and 52 degrees Fahrenheit), respectively.