As the deadline (11-11-11) to vote for the New7Wonders of Nature draws near, two caves (Puerto Princesa Underground River in the Philippines and Jeita Grotto in Lebanon) have emerged in the current Top 10 out of 28 finalists. 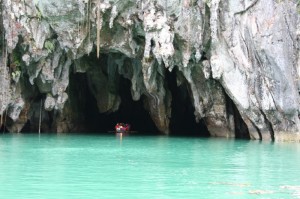 “The Puerto Princesa Subterranean River National Park is located about 50 km north of the city of Puerto Princesa, Palawan, Philippines. It features a limestone karst mountain landscape with an 8.2 km. navigable underground river. A distinguishing feature of the river is that it winds through a cave before flowing directly into the South China Sea. It includes major formations of stalactites and stalagmites, and several large chambers. The lower portion of the river is subject to tidal influences. The underground river is reputed to be the world’s longest. At the mouth of the cave, a clear lagoon is framed by ancient trees growing right to the water’s edge. Monkeys, large monitor lizards, and squirrels find their niche on the beach near the cave.” 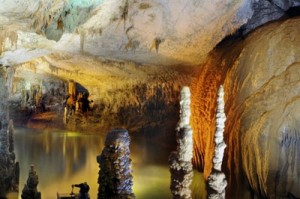 “Jeita Grotto is a compound of crystallized caves in Lebanon located 20 km north of Beirut in the Valley of Nahr al-Kalb (Dog River). This grotto is made up of two limestone caves, upper galleries and a lower cave through which a 6230 m long river runs. Geologically, the caves provide a tunnel or escape route for the underground river. In this cave and galleries, the action of water in the limestone has created cathedral-like vaults full of various sizes, colors and shapes of stalactites and stalagmites, majestic curtains and fantastic rock formations. The total length of the cave is more than 9000 m and there is one among the biggest stalactites in the world hanging 8,20 m. The grotto accommodates a huge hall with a distance of 108 m from the ceiling till the water level.”

New7Wonders of Nature started in 2007 as a campaign to create a list of seven natural wonders as chosen by people through a world-wide poll. It follows the New Seven Wonders of the World campaign, which attracted 100 million votes from around the world.

At the time of writing there are just under 5 days left to get your vote in and support your favorite natural wonder.